It is somewhat surprising, but to a certain extent we can calculate just how much it would be worth to have flying cars of various types. There is a research literature in travel theory, which is the study of how much people travel in various environments in different modes. It is mostly used in road and transit planning, but it gives us data and a point of departure. Here is the kind of thing you will find: this graph shows that as long-distance travel becomes more convenient, people do more of it: 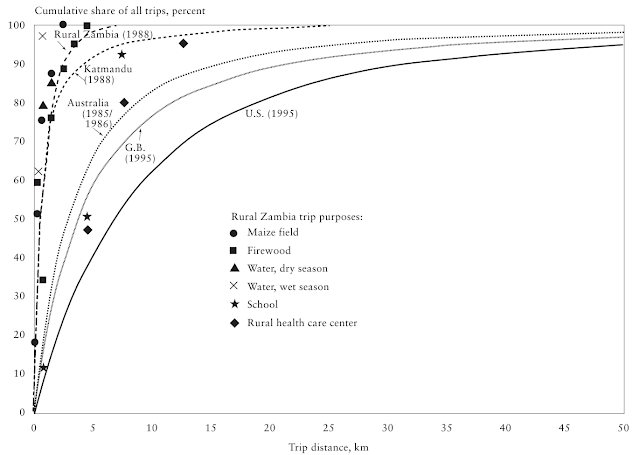 One would expect that if flying cars were available, people would make even more, even longer trips. But the surprising, unexpected empirical finding from travel studies is that people in all these societies spend about an hour a day travelling, whether they are in Zambia walking barefoot or in the US riding in an air-conditioned car. Some people travel a lot more than others within a given society, of course, but the average across a given a society is just over an hour—apparently a human universal.

To get a handle on how much people might travel under situations more advanced than ours, we can fit a curve to the data and extrapolate to longer trips and use it in calculations for faster transport modes: 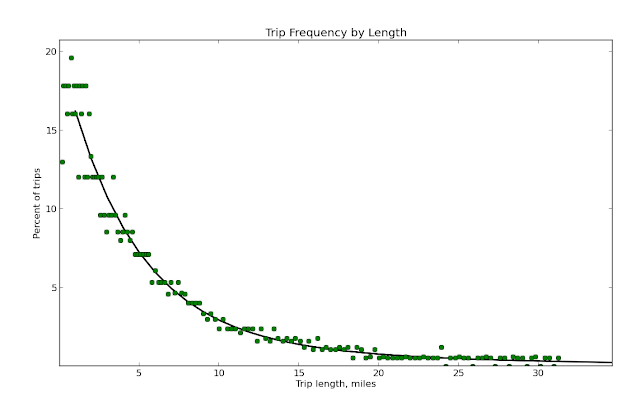 For Americans, this is almost entirely by car. It turns out that there is another more-or-less surprising universal: your car does 40 MPH. For virtually any trip, of any length, the effective speed of a car as measured by the time taken to go the point-to-point distance as the crow flies is 40. You might think that you could do better for a long trip where you can get on the highway and go a long way fast; but again, the road system is essentially fractal. The big highways, on the average, take you out of your way by an amount that is proportional to the distance you are trying to go: 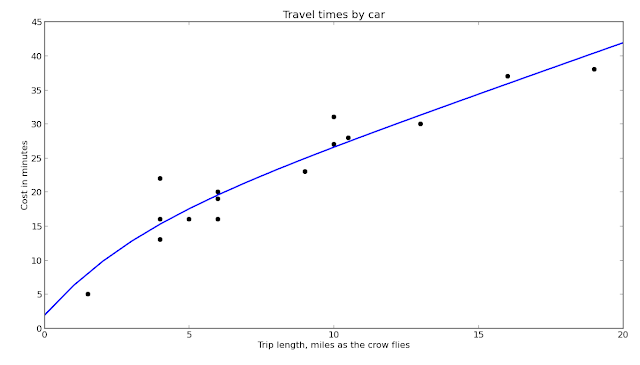 Now the really interesting thing is that we can combine these two functions and derive the value to the average American, as measured in the amount of time they are willing to spend, of getting to whatever destinations there may be at a given distance from where they live: 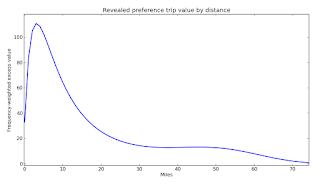 There are two features of this graph that have at least intuitive explanations. The first is the peak in trips under ten miles. This is due to a combination of the low (time) cost of such trips, and a shadowing effect. If there is a McDonalds 5 miles from your house, you aren't going to go to one 10 miles away. To the extent that many destinations are alike, the near ones “shadow” the value of the far ones. The other interesting feature is the sort of hump going out to 50 miles. This is probably a daytrip phenomenon, together with the kinds of destinations for which people will make a trip of that length: a ballpark, a hospital, a restaurant fancy enough for an anniversary, etc. But in any case this is the empirically determined value to people, as revealed by their willingness to make the trip, of destinations at various distances.

Now we can design some flying cars—at least specify how close to home they can take off and how fast they can go. Let's take three designs to cover the spectrum: a helicopter-like one that lands in the driveway but can only do 100 knots; a convertible airplane that can do 200 and land on a short private strip or straight stretch of road; and a jetcar that can do 400 but has to be flown out of a full-fledged airport. Here's how they compare with a car, noticing that for many short trips with the latter two you never take off at all but just use them in car mode: 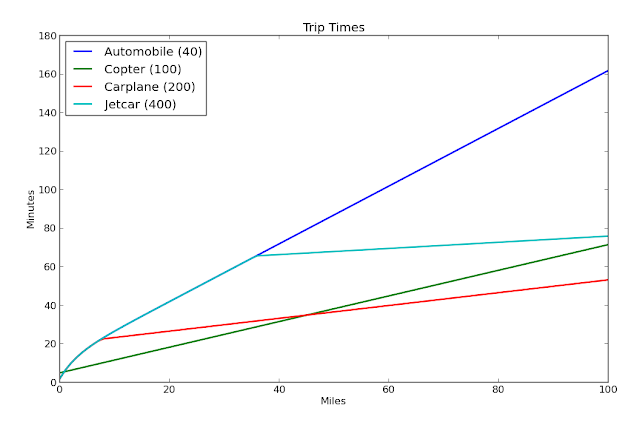 The next step is to substitute these travel times back into the value equations and find out how people would travel differently with flying cars of these types, and how much it would be worth to them. At short distances, the helicopter (or pure VTOL) dominates: 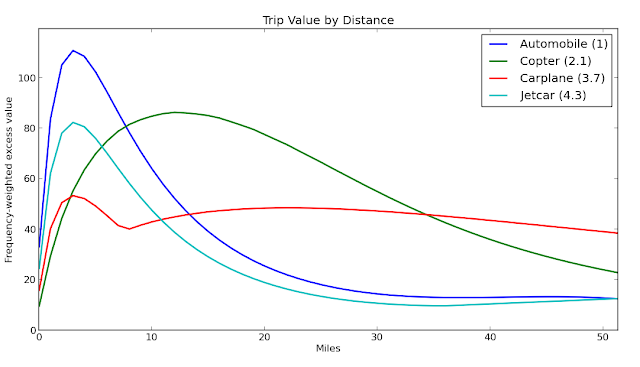 (Note that for these distances, you never actually fly the jetcar!)

This is the obvious advantage to a flying car, and the one most people are thinking of when they imagine a VTOL type: the ability to make the kinds of trips you normally do make, faster. But perhaps surprisingly, the numbers show that that's not where the major value would actually be: 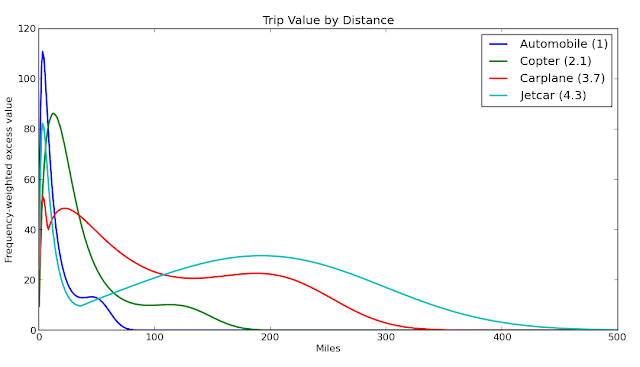 When you look at longer distances, the jetcar dominates. The difference is that you would make a lot more long trips than you do now. Jevons rules. These are higher value trips but are too expensive in time to make very often with a ground car. Note that the value of having the given vehicle, as compared with a car, can be determined by taking the total area under the curves. The reason that the curves for the flying cars appear to represent less value for trips less than 20 miles or so is that you'd be taking fewer trips under 20 miles if you had a flying car—you'd be taking longer ones that were of more value to you instead.

We are now in a position to evaluate the value of any flying car, at least as specified by a latency number (the number of minutes added to a trip by having to go to an airport, convert car to plane, etc.) and a speed. The result is expressed as a multiple of the value of having a ground car: 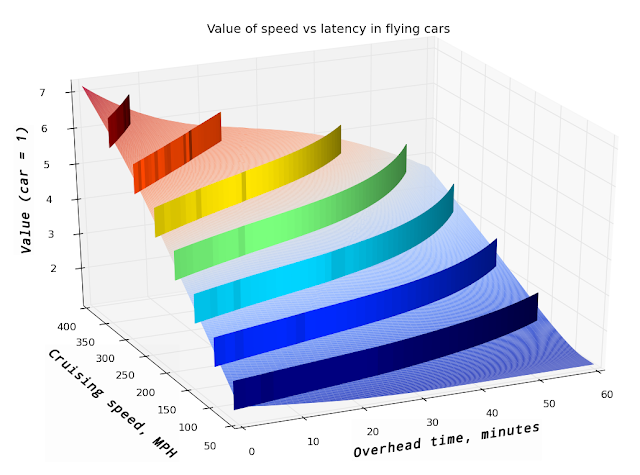 Value of a flying car represented as a multiple of the value of a ground car, as a function of speed and latency (overhead time per trip). 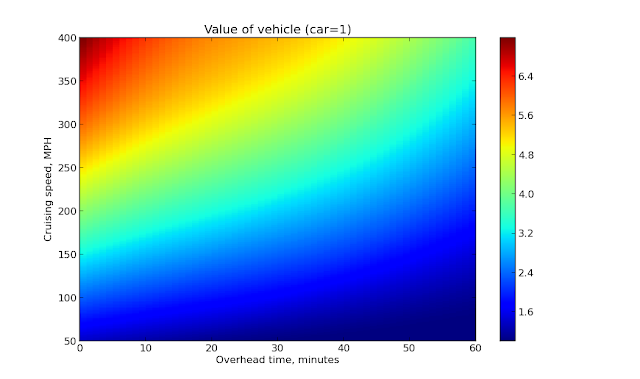 The same chart, in a more easily read-out-able form.

A jetcar that was a VTOL you could fly from your driveway and make long trips at 400 MPH would be worth 7 times as much as an ordinary groundcar. The jetcar in the previous graphs, the convertible that did 400 but had an overhead of an hour per trip, has about half that value, 3.5 times that of a car. A fast prop-driven convertible (250 mph) would be about 2.5 times as valuable as a car, and a slow one (100 mph) only about 1.4, if they had to be flown from airports. That's roughly the same increment to the value of a car that you get from being able to drive to an airport and fly commercially at 400 knots, but incur a three-hour overhead in addition to actual flying time.

In theory if you would pay today's average of $35,000 for a groundcar, a fast VTOL jet car you could fly from your driveway would be worth $245,000, as far as pure travel time value is concerned.

Its value as a status symbol remains to be seen.
Posted by J Storrs Hall at 7:50 AM