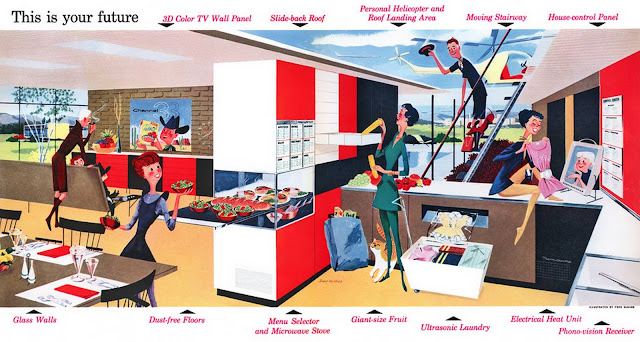 So to recap, by the 50s the autogyro had basically been forgotten, and it was the helicopter on your rooftop landing pad that was going to be your flying car of the future. The reason it didn't is that helicopters are expensive, and require a lot of training, and since you have to train in a helicopter, the training is expensive too. Your rental of an airplane as part of your flight lessons is on the order of $100 per hour; for a small helicopter, $500.

The reason that Pitcairn stayed so stubbornly attached to the idea of an autogyro is that the gyro is a compromise between an airplane and a helicopter, not only in capability but also in price. Let's look at the reasons why. 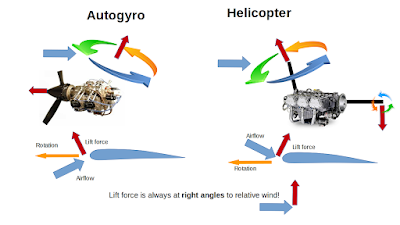 Gyros and helis both have a motor, but in the gyro (in flight), the motor only turns a propeller. The motor in a helicopter turns both the main rotor and the anti-torque tail rotor. In a gyro, the relative wind comes up through the rotor disc, both producing the torque to keep the rotor turning and lift. Since you have to keep the rotor tilted back to get the autorotating wind, some of that lift force acts as drag, requiring the separate propeller. In the helicopter, the rotor is tilted forward, so the lift force produces thrust.

One of the main components of the cost of a helicopter is the rotor hub, which even now is out near the edges of the envelope of technical capability. The hub is extremely complex; it has to be extremely precise—tiny fractions of a degree or millimeters of position matter—and it is under tremendous stress: the blades pull outward with literally tens of tons of centrifugal force. Imagine trying to build a mechanical clock that had to be accurate to a second a day, small and light enough to carry in a suitcase, but which would have railroad cars attached as the hour and minute hands. So the rotor hub is not only expensive to manufacture, but for safety must have constant maintenance by well-trained, intelligent, and motivated—read expensive—technicians. 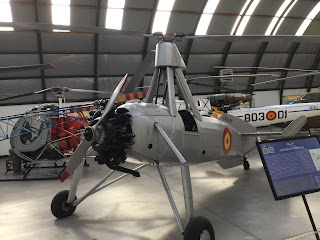 One of the things we noted about the gyros in the 30s is that they lost their wings. Cierva's "direct control" rotor hub allowed the pilot to shift the axis of the rotor without changing the attitude of the entire aircraft. 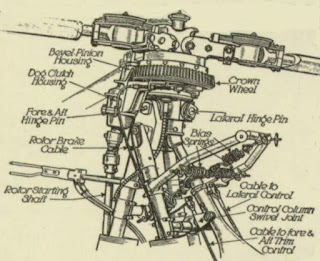 At this point, the hub of a gyro was just about as complex as a helicopter. It had fully articulated blades, with back and forward as well as up and down hinges. The rotor hub was mounted on what was essentially a universal joint; this gave it full cyclic pitch control. You tilt the axis of the hub and the resulting changes in angle of attack of the blades made them fly into a plane orthogonal to the hub axis. This was Cierva's second big ingenious contribution to rotorcraft technology, after the flapping blades that made the gyro workable in the first place.
Even with this hub, the gyro is still simpler and less expensive than an equivalent helicopter. The gyro has a propeller mounted in its engine shaft, whereas the heli has a complex gearbox that turns both the main rotor and the tail rotor. But the real simplification (and cost reduction) in gyros had to wait for one final really ingenious insight.
This was the invention of the “teeter hub” one-piece rotor by Igor Bensen in the Fifties. A lot of the complexity, and thus expense, of the rotor hub on both helicopters and autogyros was the fact that each blade had to be individually hinged both up/down and forward/back, and that the hinge had to withstand the enormous centrifugal force while remaining extremely precise with no play or looseness. Bensen realized that if there were only two blades, the hinged excursions of one were just opposite those of the other one. This includes not only the up/down flapping, but the forward/back precession, and indeed the cyclic angle of attack variation. The way this works is ingenious but mechanically simple, so the rotor can be one solid piece without the centrifugal force going through linkages, hinges, and bearings. This substantially lowers the cost and raises the reliability of the gyro. Unfortunately, you can't use Benson's trick for a helicopter, because it doesn't allow for collective pitch control. 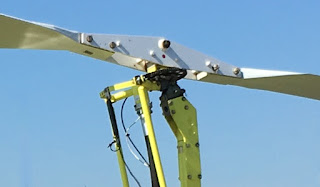 There has been something of a resurgence of gyros in recent years, particularly in Europe, using the Bensen-style teeter hub and with a small enough engine to fit in a light-sport category. This brings the price down to luxury-car levels instead of up in the stratosphere with helicopters. (In the US, regulatory headwinds have nevertheless made them few and far between.) They are fun machines to fly but don't have as short a takeoff roll as the Pitcairn gyros. The Pitcairns had three times as powerful an engine, and would pre-rotate the rotor up to full flying speed before moving. The modern light-sport types use a lighter mechanism to bring it up to half speed and use the takeoff roll to bring it up the rest of the way. But they can still land on a dime. 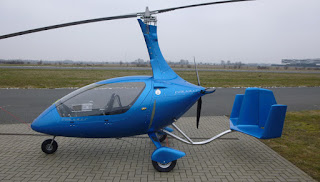 The German-make Calidus is the only autogyro currently being produced that has an FAA type certification. If you want any of the 10 or so other ones in the market, you have to get a parts kit and build it in your garage.

Takeoff in a gyro is more difficult than in a fixed-wing airplane, but landing is easier. The ratio of takeoff to landing gyro accidents in the 30s bears this out (as does your author's personal experience). The most common accident in a plane is slipping, stalling, and crashing on approach. In a gyro, it is tipping on takeoff with a rotor ground strike. You are much more likely to walk away from rotor strike than an approach crash. In 1932 Fortune magazine carried an article that listed the ten worst autogyro accidents to that time — none of them fatal.

Gyros didn't catch on as a segment of aviation for a number of reasons. The first and most obvious is that they were superceded by helicopters. A gyro is in practice a compromise between an airplane and a helicopter; one manufacturer advertises that it “does 90% of the mission at 10% of the cost.” It's probably fair to say two thirds of the mission at one third the cost. In today's specialized commercial market it loses to the extreme cases for particular applications: airplanes for speed and fuel efficiency; helicopters for hovering and vertical takeoff. The advantages of the compromise were, in Zimmerman's words, “an airplane suited to the needs of the private owner.” A private car is likewise a study in good-enough trade-offs.

In the next post we will consider the question of whether a gyro could actually be a good-enough flying car.
Posted by J Storrs Hall at 4:23 AM