The first time I took a flying lesson in a regular fixed-wing airplane, my flight instructor had me taxi across the airport to be sure I could use the pedals to steer the plane. Then we lined up on the runway and he said, "Ok, now take off."
Taking off in a fixed-wing airplane is fairly easy; you shove the throttle to full power and steer in a straight line, and when the airspeed indicator says you're going fast enough, pull gently back on the yoke and away you go.

In a gyro, not so much. First, line up on the runway and push the stick full forward. Then, holding the brakes, move the throttle up to about 2000 RPM, or the engine will stall when you do the next part. Release the rotor brake (wheel brakes still on) and engage the pre-rotator. You have to slowly edge the throttle up as the rotor accelerates, until it reaches 200 RPM. Now, in quick succession, release the wheel brakes, pull the stick full back, advance the throttle up to about 4000, and steer straight down the runway. As you accelerate, the relative wind will bring the rotor up to about 400 RPM. This enough to begin generating lift, which pulls you up onto your back wheels, doing a wheelie down the runway. You must accommodate this instantly with the stick; otherwise the angle change of the rotor shaft with the wheelie will tilt the rotor too far back and pull you over backwards.
Congratulations! you have now formed a wing. Still balancing on your back wheels, use it to take off. Continue accelerating down the runway, noting that the torque from the propeller will be trying hard to make you turn left; counteract this with pressure on the right rudder pedal. 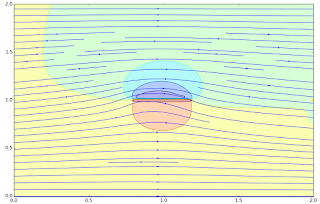 The best way to visualize the rotor disc as a wing is to see that it induces the same lift-producing circulation patterns as a solid wing, but notice that the airflow can go through the disc. As you see, the flow is coming up through the front and going down through the back part of the disc. This pushes up in front and down in back; but by the magic of gyroscopic precession, it tries to tilt to the right, so push the stick to the left to counteract it.

Back in the 30s, barnstormers in Pitcairn gyros used to take off from football fields, off the ground in 50 yards with plenty of room to climb out over the stands. For a flying car, you could easily regain the advantages they had -- a more powerful motor and a pre-rotator capable of running the rotor all the way up to flight speed.

But for a flying car to be used by the multitudes, you also want a somewhat more intuitively controllable vehicle. The problem with the gyro is that it is a pendulum hanging from the rotor, and any control input has a tendency to set it swinging, and swinging acts as an oscillatory control input to the rotor. This not only makes control more difficult, but can result in a queasy ride.

By far the major innovation in aviation in the past few years is the quadcopter drone, along with its variants. It sits in a very nice local optimum in flying machine design space; it only has 4 moving parts! The electric motors have a quick enough response time that you can control roll, pitch, yaw, and lift purely with differential power.

The major problem with the quadcopter as a flying car is that if you scaled it up to car size, it would need 1000 horsepower to do the kind of things that the toys do, and even so it would be extremely inefficient as a flying machine. But it seems possible to do yet another compromise and get some of the advantages of the quadcopter along with those of a gyro. 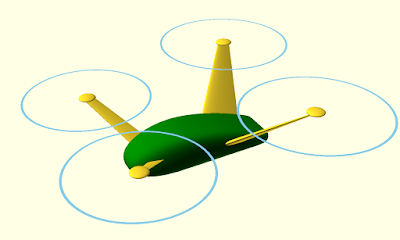 The basic ideas are
Now takeoff is a much more civilized proposition. Start the rotors up, accelerate down the runway, lift off. None of this pendulum stuff. Some back-of-the-envelope calculations indicate you should be able to get off the ground inside 70 feet, which is a short driveway or the diameter of a circular roof pad on a 50x50 foot house. (Just bury those damned electric wires!)

In cruise, you can afford to slow the rotors down and very likely do better than a helicopter, say somewhere between 125 and 150 knots. That will depend on how much engine you put in, of course.
And landing is as easy as falling off a log. The one thing a gyro does better than any other aircraft is stop. Just tilt the rotors back and the autorotation power goes way up because they are seeing more air. At the same time the force vectors give you a lot of that lift as drag. You pretty much stop dead in the air. All you have to do is arrange for that to happen just as you touch your driveway or rooftop pad.

In the next post, I will speculate on how and whether flying cars of this or similar design would make a big difference in the way people live, the way the private automobile did in the 20th century.
Posted by J Storrs Hall at 8:32 AM