Travel theory tells us that if we can make a flying car that only has five minutes of overhead and can do 250 knots once in the air, it would be worth about 5 times as much as a ground car. (250 knots is a speed limit in US airspace below 10,000 feet, so we will use it as a point of departure for speculation. You can't fly much over 10,000 feet without needing oxygen or pressurization.) What are the chances of building such a thing? How much power do we need, for example, to get 250 knots out of our flying car? Here's a graph of a wide range of 20th-century propeller aircraft, showing power vs speed. There's a huge variation in speed at any given power (and vice versa), but it seems possible to design one that gets 250 kts if you have more than 500 HP available: 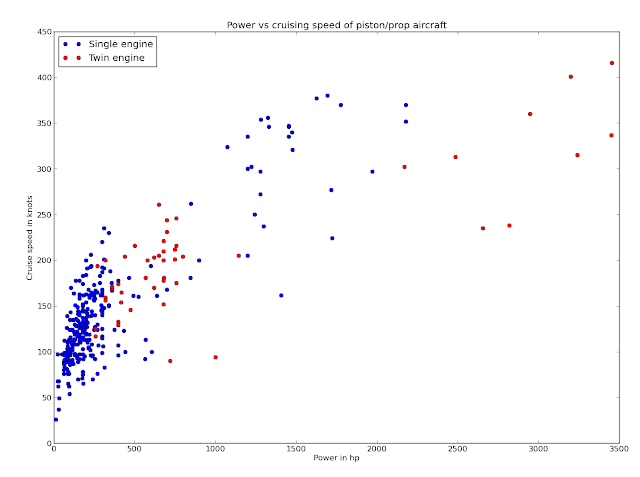 This graph has an odd structure, apparently; there are two separate bands for single-engine planes, which are interleaved with two bands of twins. What's happening is that the high-power, fast singles are WWII fighters and the like, built with very different design goals from the small light private planes which make up most of the low end. The variation in power has a lot to do with aircraft weight, of course. Using the same engine, you would get much more speed in a single-seater with barely room for your flight bag than you would in a car-like plane that carries a family of four and their luggage. We can finesse the issue by dividing by the weight of the loaded aircraft. Here are power-to-weight ratios by airspeed: 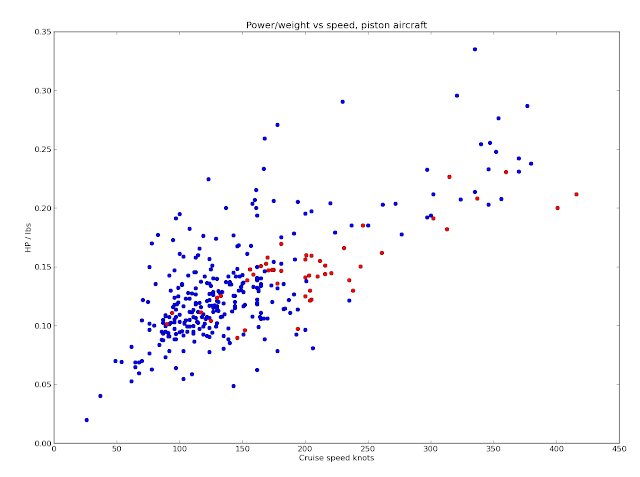 You can see that the designs are much better mixed, all falling along the same “main sequence”.

A speed of 250 kts means that we need a horsepower number somewhere between 0.15 and 0.25 times the weight in pounds. You can see that the graph curves toward higher speeds at the same power loading over about 150 knots. This is due to the fact you use less and less power to produce a pound of lift the faster you go, so faster airplanes tend to be bigger and heavier. Let's estimate that with high-tech materials we can make the vehicle 2000 pounds and have it carry 1000 pounds of payload. That means we need somewhere on the order of 600 horsepower. And that's a problem: a piston engine producing 600 horsepower weighs on the order of 900 pounds. Airplanes with those statistics were produced, in the Thirties and Forties, but they were fighters and racers, more than half engine. We would be much better off with a turbine. The Lycoming/Honeywell LTS101-650C, for example, packs 675 HP in only 241 pounds.

I then proceed to argue that the flying car you would like to have, one that would get up into the range of airliner speeds while being able to land on your driveway, would have to have a turbine in it.

However, for the cheapo build-it-today autogyro version, we can probably get away with something different. One of the reasons that piston engines are so heavy in airplanes (my 0-360 gets 180 HP out of 250 lbs) is that they are directly coupled to the prop, and the cubic inches are to provide torque at a relatively low speed. The way to get high power at low weight is to have lower torque at high speed, and then gear it down. The Rotax engines used in most current gyros works that way, for example.

You could also get better power-to-weight by using a 2-cycle engine; Rotax makes a snowmobile engine that gets 150 HP out of 100 lbs. The major problem with 2-cyclers for aviation is that they do have a tendency to announce their end-of-useful-life by suddenly seizing up.

So what we would do in the gyro is to have two such engines, and no gearboxes. Instead couple the engines directly to generators, which feed electric propulsion and the rotor motors. (Today's electrics have a remarkable power to weight, getting up to several HP/lb.) You have some batteries, which provide you with a hole card; but you have an even bigger one: you're an autogyro. Just run your rotor motors in regenerative braking mode on the way down, and you can regain quite a bit of the energy of your altitude. That and your second engine give you a decent margin of comfort.

So, yes, the flying car of the future will feature a turbine, or maybe something like a fuel cell, after a bit more technological progress. But we can still build a usable one today with what we have.
Posted by J Storrs Hall at 6:50 AM