There was recently posted on the physics preprint server Arxiv.com, a paper soon to be published in The Astrophysical Journal about a huge radiation explosion in the center of our galaxy, probably associated with Sagittarius A*, the enormous black hole there.

The paper itself, by Bland-Hawthorn, Maloney, Sutherland, and Madsen, is here.
A more digestible overview for the general reader is here.

The explosion event appears to have happened about 3 and a half million years ago, and lasted maybe 300,000 years, for reasons outlined in the paper.

We now turn our attention to theories of climate change. The two leading paradigms for causes are CO2 and the Sun. CO2 is more popular today, but as recently as the 1980s leading climatologists favored the Sun, for example because the depression in solar activity called the Maunder Minimum coincided with the period of unusual cold known as the Little Ice Age.

It is worth point out that the two theories are by no means exclusive or contradictory. Excess CO2 might warm the Earth, by a well established pathway of radiative physics and the greenhouse effect; but at the same time the Sun might also have an effect.

Over the past two decades it has become clearer how this effect might work. The Sun's magnetic field becomes stronger and weaker with solar activity levels as revealed by sunspots. A strong magnetic field protects the Earth from galactic cosmic rays, a weaker one lets more of them through. Galactic cosmic rays seed cloud formation by means of a complex but laboratory-tested process.

Anything that affects cloud formation might thus have an outsized effect on climate. Consider for example the classic diagram of energy flows in the Earth atmosphere from Kiehl and Trenberth: 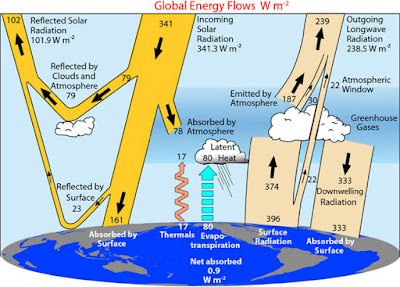 The atmospheric window (on the right) is a relatively minor energy channel, and affected to the tune of a few percent by CO2 variation. Clouds (left) manage some 4 times as much energy; a smaller variation would have a noticeably greater effect. So the interesting question is one of the relative sizes of the effects.

It thus occurred to me to wonder, when I heard about the radiation explosion, whether we might see some indication of the huge wave of radiation that must have swept over the Earth (for 300,000 years or so) in the neighborhood of 3 and a half million years back. So I went looking for a temperature record with the appropriate range. The first thing I found was a 5 million-year reconstruction by Lisiecki and Raymo (2005) using oxygen isotope ratios in deep ocean cores. This appears to be quite well-regarded; it is even referenced in the Wikipedia article about the technique. 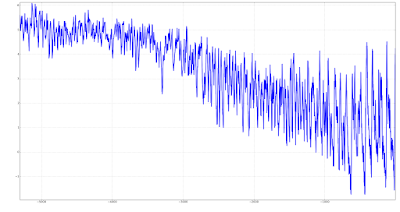 Lo and behold, right at 3.3 million years ago there is a significant dip. Here it is enlarged: 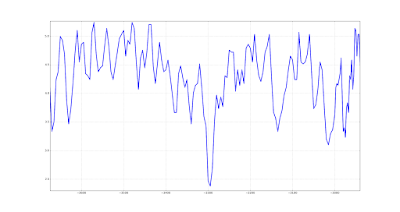 Indeed, it's so distinctive that L&R have a closeup of it in their original paper:
(note that my graphs read advancing dates left to right, theirs right to left) 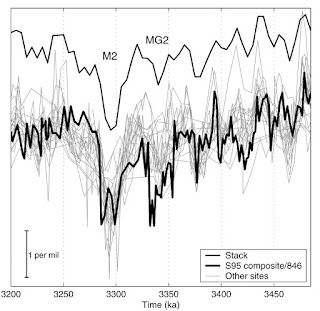 Now I'm sure there are other explanations for this out there; careers can be made in science for even an incorrect, if well-argued exegesis of so salient an anomaly. But I hadn't ever heard of this one. Given what I did know, though, I went looking for it, and there it was.