Can Sheridan make it?

Of the SF TV series of the past century, Babylon 5 was probably the one that came closest to accuracy in its physics. Unlike the ubiquitous and unexplained fake gravity in Star Trek and Star Wars, B5 was a space station modelled on an O'Neill colony, that rotated for pseudogravity.
In one of the pivotal episodes, station commander Sheridan is forced to jump from a shuttle running along tracks near the center of the station to escape a bomb:
In the episode, Ambassador Kosh is forced to reveal a secret to save Sheridan. But Sheridan wasn't jumping from an airplane over a planet; he was jumping from near the center of a space station, where the acceleration from the rotation is quite small. How close could he have gotten to getting down by himself, and what's the smallest amount of equipment he would have needed to make it?
We can make estimates of the parameters: He's about 150m (500 feet) above "ground", which is moving at 25m/s (60mph). He probably jumped at 5 m/s as he was trying to escape the bomb. And the shuttle was probably moving in the neighborhood of 25 m/s itself.
So he has an axial velocity of 25, a radial velocity of 5, and needs to pick up a circumferential velocity of 25 to match the ground when he gets there.
Let's say he can hit the ground at 5, his jumping speed (think of it as 10 mph), and make it.
What does he have to work with?  First and foremost, the 60 mph wind of the shuttle's speed. That's nearly terminal velocity for a human in a draggy attitude. He could easily use skydiver technique to move back up near the 0-G centerline with that much wind to work with. Then he could just hang there and await rescue (which was 2 minutes away.)
But he didn't. Maybe the explosion blew him the wrong way, or stunned him, or something. In about 10 seconds, the wind will bring his axial velocity down to about 5 m/s, survivable when he hits something; he will have traveled about 150m axially at that point, but he appears to have plenty of room in that direction. His radial speed of 5 will only have taken him 1/3 of the way "down" by then, so he could land on one of the big struts you see and hang there against a gravity equivalent to the surface of the moon.
What if he just keeps going all the down? Remember, there is no force accelerating him outward. Velocities do not accumulate the way they do falling toward a planet; he is accelerated by the wind of the turning station, and that is always in a tangential direction. Here's the path he takes: 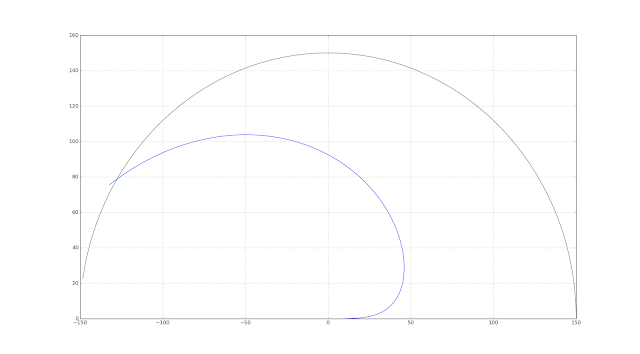 When he hits the "ground" he has a radial speed of about 7m/s and a tangential speed about 8 slower than the station is turning. So he hits about equivalently to jumping off the top of a truck doing 19 mph. He might break a leg, but would very likely live. If he hits flat, soft ground, and rolls, he has a decent chance of walking away.
Buildings and trees, on the other hand, are not his friends...
However, if his uniform had Rocky the Flying Squirrel webbing between arms and legs, he could very likely make a perfect two-point landing.
Posted by J Storrs Hall at 1:51 PM