From Where is my Flying Car, chapter 3:

Henry Adams, scion of the house of the two eponymous Presidents, wrote in his autobiography about a century ago:

The coal-output of the world, speaking roughly, doubled every ten years between 1840 and 1900, in the form of utilized power, for the ton of coal yielded three or four times as much power in 1900 as in 1840. Rapid as this rate of acceleration in volume seems, it may be tested in a thousand ways without greatly reducing it. Perhaps the ocean steamer is nearest unity and easiest to measure, for any one might hire, in 1905, for a small sum of money, the use of 30,000 steam-horse-power to cross the ocean, and by halving this figure every ten years, he got back to 234 horse-power for 1835, which was accuracy enough for his purposes.

In other words, we have had a very long-term trend in history going back at least to the Newcomen and Savery engines of 300 years ago, a steady trend of about 7% per year growth in usable energy available to our civilization. Let us call it the “Henry Adams Curve.” The optimism and constant improvement of life in the 19th and first half of the 20th centuries can quite readily be seen as predicated on it. To a first approximation, it can be factored into a 3% population growth rate, a 2% energy efficiency growth rate, and a 2% growth in actual energy consumed per capita.

Here is the Henry Adams Curve, the centuries-long historical trend, as the smooth red line. Since the scale is power per capita, this is only the 2% component. The blue curve is actual energy use in the US, which up to the 70s matched the trend quite well. But then energy consumption flatlined.

This is the text where I introduce and illustrate what I call the Henry Adams Curve. But as it is one of the key points in the book, it bears some further looking into. The history of American energy use is interesting and complex, and has gone through several major phases. The graph above, and all the others you'll see in this post, came from the data behind this graph at the EIA:

The first point of interest is the deep history of energy in the 1700s. For nearly a century on the graph, the main energy source is listed as wood. In fact all the energy that did useful work was from food, and almost all the lighting was from tallow wax, neither of which is listed. Wood was used for heating, but as you will learn if you ever visit Monticello, when Thomas Jefferson would wake up on a winter's day, he would have to break the ice on his bedside washbasin to wash his face. (King Henry II did the same, as seen in the classic film Lion in Winter; that's just the way things worked.)

And yet the EIA lists a LOT of wood being used in the early days. This is more clear when you divide their numbers (in quadrillion BTUs) by population and convert to kilowatts per capita: 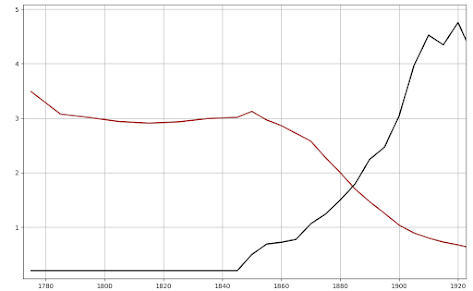 Brown is wood, black coal
If we take this at face value, for the latter half of the 19th century, that Adams was writing about, coal simply swapped for wood, and before that there had long been 3kW of wood per person.
But if that was the case, what on Earth was Henry talking about? Well, for example, in 1800 you went to England on a wooden sailboat, and in 1900 you went on a coal-powered steamship. Big difference. Doesn't show up in the raw energy numbers.
The bottom line is that using wood as fungible with energy is very problematic. In early days, the vast majority of woodcutting was not for firewood; it was to clear land for farming. (And those farms provided the real fuel, i.e. food.) Wood didn't save work; it cost a lot of work. If I clear land with a controlled burn, that wood simply doesn't count as energy fuel.
So we need to think of the Henry Adams Curve primarily in terms of coal and subsequent fossil fuels. They were useful; they let us do things we couldn't before; they powered the Industrial Revolution. Henry Adams lived through the flourishing of the Industrial Revolution in America, and that is what he was talking about. 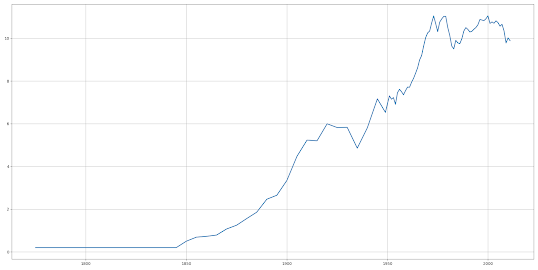 So here's the curve again, just fossils this time. We can zoom in on the Victorian period that Henry was talking about and it has a remarkable fit to an exponential growth curve (and remember we are talking per capita):

Wow. --and guess what: this isn't a 2% growth rate, it's a 4.2% growth rate. This curve was almost entirely coal-driven. The inflection point where it begins to flatline is exactly 1911: World War I.
For most of the rest of the 20th century coal stayed more or less flat, but another curve based on oil, gas, and nuclear succeeded it:

Again, quite a good fit for those years; the big dip is of course the Great Depression.
The growth rate of the second curve isn't 2% either: it's 5.7%.
(Above a 0 level of 5kW)
You can see that the 2% curve (green) I used as the Henry Adams Curve in the book is a trend averaged from both of these. 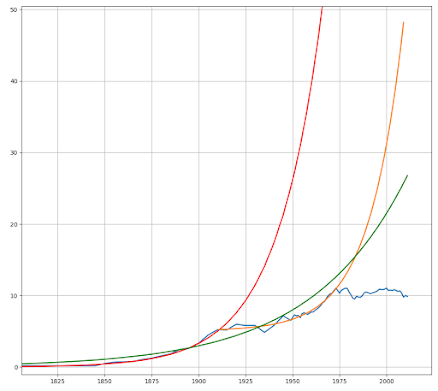 If we had stayed on even the second curve, we wouldn't be using just 2.5 times as much energy, we'd be using 5 times. And as I argue in the book, that should have been quite technologically feasible.
If only we had wanted to.