The autogyro as flying car (part I)

In recent years there has been an increasing demand for an airplane suited to the needs of the private owner. Without going into a discussion of the problem it may be said that such an airplane should be capable of descending along a steep path at such a low rate of speed that it will be unnecessary for the pilot to alter the direction of the flight path or the speed when near the ground in order to make a satisfactory landing.

An airplane suited to the needs of the private owner. The obvious implication was that not only will the airplane be privately owned, but the runway. The runway at the small county airport near my home is a full 12 acres of concrete; the airport as a whole is 100. This isn't going to fit on your suburban lot, or even your country estate. Zimmerman was attempting to design a plane that could in fact be used from a country estate. 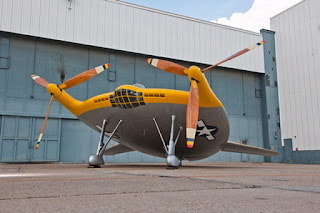 Zimmerman's entry into the field was a unique aircraft that came to be known as the "Flying Pancake" (or more alliteratively, Flapjack). It never came to much, but it stands as a reminder that people were trying for private aircraft back in the 1930s, and understood what it needed to be able to do.

The aircraft that did nearly make it was Juan de la Cierva's autogyro. It's not remembered just how much of a cultural/technological icon the autogyro was in the 30s.
La Cierva refined the Autogiro (his trademark name) through the 1920s, making and selling them in England. In 1929 he was visited by American aviation pioneer Harold Pitcairn, who had built the successful aircraft company which ultimately became Eastern Airlines. Pitcairn was quite taken with the Autogiro, bought the rights to build and develop it in the USA, and cross-licensed and collaborated with La Cierva in its further development. In 1931, a Pitcairn Autogiro landed on the White House lawn, as part of the ceremony in which President Hoover presented Pitcairn with the Collier Trophy for outstanding achievement in aviation. The same year, Amelia Earhart made a transcontinental flight and set an altitude record in an Autogiro; she published an article in Cosmopolitan in August saying that soon “country houses would have wind cones flying from their roofs to guide guests to the front lawn landing area.” 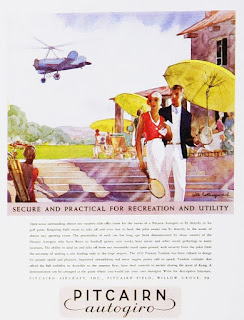 Pitcairn actually sold Eastern Airlines to fund the development of the gyro as a private vehicle. He spent the 30s trying to sell them to the country club set. He didn't sell many, but did manage to get them into the public mind as the airplane of the future. 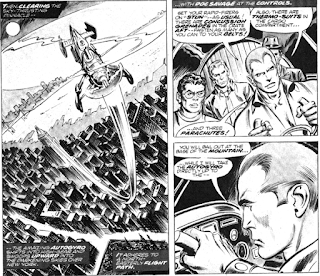 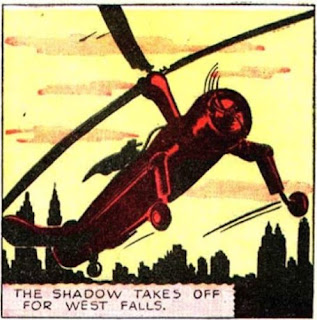 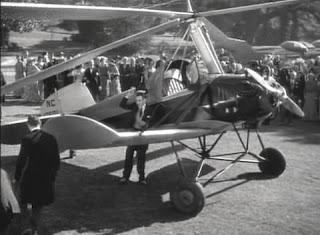 The rich groom-to-be arrives at the wedding in a gyro in It Happened One Night (1934). 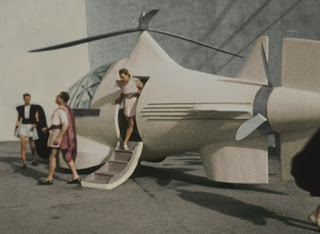 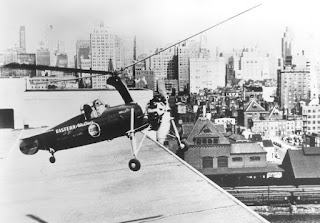 In reality, Eastern Airlines gyros delivered the mail to the roof of the Philadelphia Post Office.


The gyros of the early Thirties had wings, but the ones of the later Thirties did not. The difference was what was called the “direct control” rotor hub, invented by La Cierva and incorporated on the C-30 and most later Cierva and Pitcairn models. This meant that the pilot had a direct handle on the cyclic pitch of the rotor, rather than influencing it by way of the attitude of the fuselage (as by ailerons on the wings).

In 1936, in one of the ironically tragic knife twists of history, Juan de la Cierva was killed when a conventional commercial airliner (a DC-2) crashed on takeoff in Croyden, England on his way back to Spain. Besides the personal tragedy, this was a disaster for the autogyro community at large. La Cierva had been not only its intellectual but to a large extent its spiritual leader. After his death, one can sense in the historical record a breakdown in the friendly rivalries among the various inventors, engineers, and entrepreneurs, and the rise of serious antipathies.

The English company La Cierva had founded quit autogyro work to focus on helicopters, refusing to share technical information with Pitcairn, even though contractually obligated to do so. Somewhat inexplicably, given the looming hostilities of WWII, they licensed their technology to Focke-Wulf, which flew the first practical helicopter, the FW 61, in 1936. German submarines carried the Focke-Achgelis FA-330, a towed observation gyrocopter on a 400-foot tether, during the war.

Back in the US, Pitcairn continued with refinements of the Autogiro, going through some 36 models over the decade. Ultimately La Cierva and Pitcairn invented almost everything that goes into a working helicopter.

Private aviation essentially vanished for the duration. Waldo Waterman, Moulton Taylor, and Ted Hall, who had experimented with various flying car designs, were sucked into the military aviation effort. The size of the U.S. aviation industry quadrupled.

The Navy seized Pitcairn Aviation's airfield in 1942 under threat of eminent domain, paying him a third of its value. Pitcairn had developed the technology that made helicopters possible: this was such common knowledge in the aeronautical engineering world that the key patent was referred to simply as “582.” But in a patriotic gesture Pitcairn substantially reduced royalties for any of the several new helicopter companies—Sikorsky, Piasecki (Vertol), Bell—that were building helicopters under government contract. Under the terms of his agreement, the waiver expired in 1946. With the prospects of having to pay full royalties, the helicopter companies told the government that the price of helicopters would go up, so the government essentially nationalized the patents. Pitcairn sued. The suits went all the way to the Supreme Court, and ran from 1948 to 1977, by which time Pitcairn himself had been dead 17 years. He was legally vindicated in the end, the Court finding that the government had infringed 59 claims in 11 separate patents, and awarding his estate damages of $32 million. But Harold Pitcairn's (and Juan de la Cierva's) dream of safe, low and slow aircraft for general private use had been crushed. 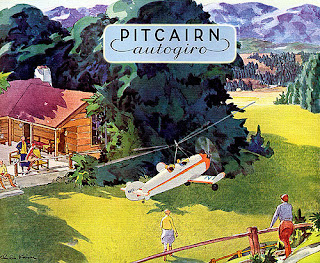 By the 1950s, the autogyro had been mostly forgotten; the private flying car of the future was going to be a helicopter. In the next post, we will look at what the tradeoffs are from a technical standpoint.
Posted by J Storrs Hall at 8:20 AM